This is a perfect example of why I’m convinced the best education for Ashar is (a) individual and (b) flexible. She had an interest, and when given the time and the freedom, she not only pursued it, she really owned the topic and all sorts of things that came with it. If someone had told her in December, “OK, we’re going to study robots this week, and we’re going to write a report about how robots are used,” I guarantee she would remember nothing by now. But, as it stands, she’s followed this interest for a full month, probably knows more than me about robots and how they work, and has had a good time doing it.

I’d mentioned the Lego robots (non-“functional” because we can’t afford the $300 working robot kit from Lego) before. The thing with these is, Ashar was very specific with each of them about where their sensors are, what they’re used for, where they’re effective, and all sorts of other details. 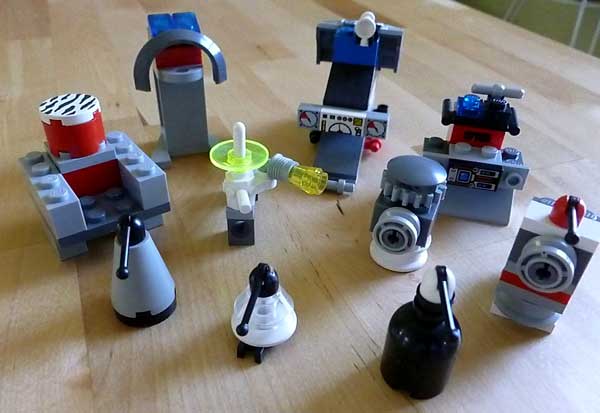 These are just a few of the smaller ones. She’s got moon and Mars rovers and some other larger ones she designed up in her room, but they’re not terribly portable for Mom’s photo shoots. Of these, her favorite is the little monopod in the front center (we learned that monopod means “one foot”). She would tell you that the two in the middle row at right are from the same factory; you can tell by their round front sensors. Many of these are household robots – used for things like cleaning, amusing pets (so they’re not lonely while you’re at work), cooking and more. The one in the middle row at left has a trap door on the back; that’s where it puts the litter it picks up.

Speaking of being environmentally friendly, Chris had found, a few weeks ago, a kit from a company called MAKEDO that gives you reusable connectors designed to help you turn your recyclables into things like dogs or robots. We’d been saving up boxes of various sizes, and Ashar bought a little bag of wheels and washers at our local Rescue Mission store for about 50 cents, so today we put those things together and made some recycled “friends.”

Originally, she wanted to make all robots, but her creativity as she was putting some of the pieces together led her in other directions. 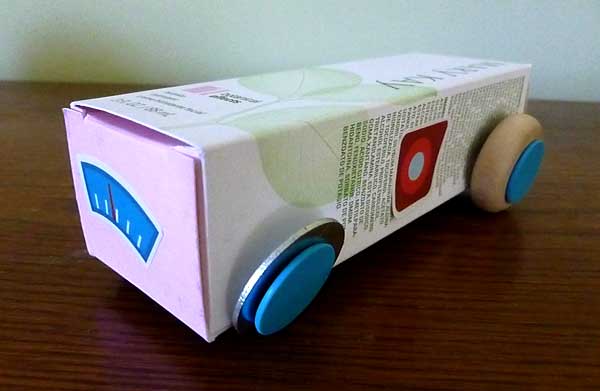 I had mentioned before that cars – especially race cars – are now an interest of Ashar’s too. No surprise, then, that a car was the first MAKEDO creation she built. Those blue pieces are called “re-clips” and work kind of like reusable zip ties. They’re made of nylon, too, again in keeping with the whole environmentally friendly thing. (Ashar LOVED that concept, so we talked a lot about it.) She liked using her wheels and washers from the Rescue Mission store, one of my Mary Kay boxes, and some of the stickers from the robot kit. 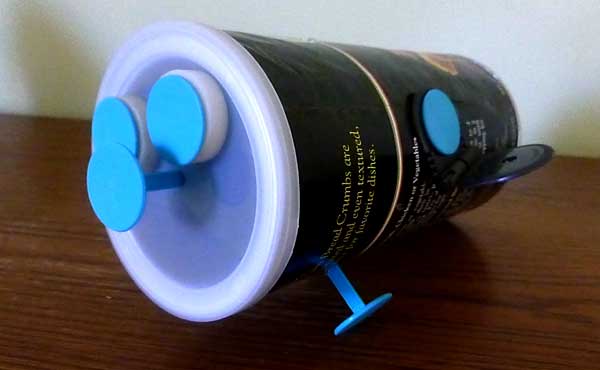 This guy is a bird. (Or an airplane. But probably a bird.) He’s got the MAKEDO hinge pieces for wings and re-clips for feet and a beak. The re-clips are also holding on two large white washers for eyes. His body is a breadcrumb container. 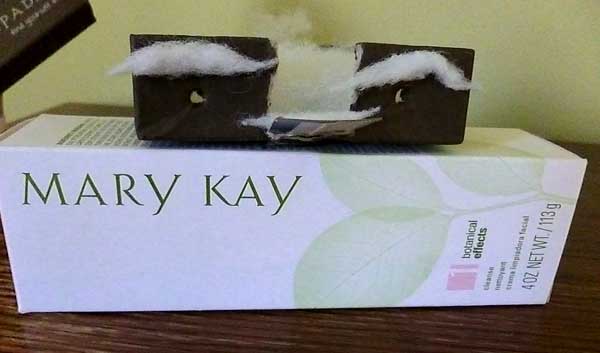 This is a “monster.” A friendly one, though. He’s made from a Mary Kay box and a Silpada jewelry box (and a mouth cut from one of our spaghetti boxes. His “eyebrows” and “mustache” were a completely great Ashar idea: Squeeze together the padding that was inside the box for the jewelry, and glue them on. She also figured out how to punch the eyes out, and how to fit the mouth in place where she wanted them. 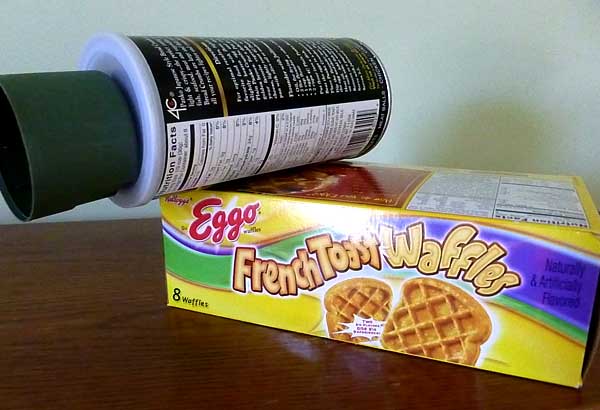 This is some kind of tank or submarine with a periscope. (Or, as Ashar tried to describe it, “the military thing with the spy place on top.”) Waffle box, another breadcrumb container, and the lid off a used-up can of spray paint. Two neat things here: First, the periscope piece spins all the way around, because of how we used the re-clip to attach it. And second, when we tried to punch a hole in the top of the spray-paint can lid, it punched it out too big, but Ashar was quick to say, “Oh, we can just put a washer there!” 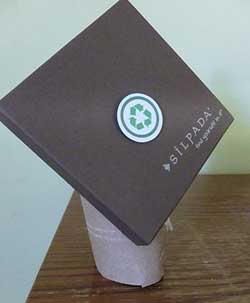 The last creation was a simple one with some of our remaining parts – it’s either a flower or a windmill (you can tell that Ashar likes to leave her options open!) That’s the lid from the jewelry box the monster’s head was made out of, and, you guessed it, a toilet-paper roll, attached by a re-clip.

Other than providing some help punching holes, I tried to completely stay “out” of the planning stages for these and just see where Ashar wanted to go.

She had a great time, though I fear I’m going to have to buy more of the MAKEDO kits because she’s not going to want to take these apart to make more stuff, and we’ve used all our pieces. It’s a shame I didn’t know that BEFORE her birthday last weekend, but, hey, there’s always Christmas.

A few other bits of random learning today:

Tomorrow is our homeschool association’s curriculum fair. I can’t wait to meet some other local homeschoolers, but I go making this vow: I will not buy the shiny curriculum. Even if it’s used and cheap. I can’t promise I won’t pick up books here and there, but I will strive to do so ONLY if they catch Ashar’s interest. (Or, if, being a mom, I just can’t resist thinking, “But I know she’ll love that!”)

As we browse, I’m going to try to remember today, and all the awesome things Ashar decided to discover on her own, and hopefully I’ll walk out with only the things that will help meet that goal I mentioned earlier of individual and flexible learning! One of the things I’ve learned already is that those traits aren’t a given in homeschooling. There are plenty of inflexible or “mass-market” homeschooling solutions out there, the same as there are in public or private school. I can’t and won’t say that any of those are bad, but I can say they’re not what we need. Now wish me luck sticking to that!

2 thoughts on “Making robots out of recycling… and Legos!”