I went to today’s curriculum fair, held by our local homeschool association, in part just to be nosey. I want to know what other homeschoolers are doing. If nothing else, I wanted to look at some of the materials and go, “Nope, that’s not for us; we’re doing the right thing.”  Today turned out to be much more than that – in a good way.

We were joined by some good friends of ours whose daughter is also taught at home. (This is the same wonderful gal who was Ashar’s sleepover guest recently.) It was just great to get to talk with them and have the girls EXCITED about learning. They stood still and listened to a man from our local historical society talk about Colonial times for, seriously, 20 minutes. That’s big for our ADHD Ladies! 🙂 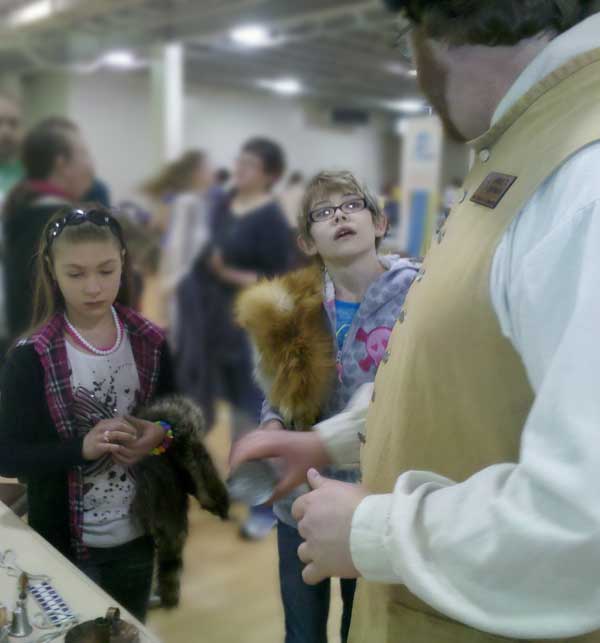 The girls learned from him about wampum, furs (which they much would have preferred to keep as pets!), writing with feathers and ink, how our county was important during the Revolutionary War, and a bunch of other stuff. (I’m not even sure WHAT stuff, because I was in the background chatting.)

We did sneak a peek at some of the packaged curriculum, but the prices alone were enough to send our two families (both on what I affectionately call the low-budget homeschooling plan, AKA “we have internet, and we have the library”) packing for the used-curriculum area.

Other odds-and-ends purchases included a biography of Martin Luther King Jr.; a book called “Your Rugged Constitution,” a lovely 1952 paperback explaining what, exactly, all that stuff in our Constitution means; a pretty cool book of themed word searches with facts about each puzzle’s topic included; a book called “Understanding Geography” and another called “Great Map Mysteries,” which the woman selling highly recommended to Ashar, as it works detective stories into reading maps; and another Abeka text called “Our America,” which is a history and geography basic overview. Oh, and “The National Geographic Traveler’s Map of Italy,” and a little pamphlet-sized book from 1985 called “The President.” Grand total on all that was, maybe, $10 or $15.

The splurge was TOTALLY unexpected. Ashar does like history, but she has NEVER been much for dates. I think it wasn’t until this year that she picked up on “In 1492, Columbus sailed the ocean blue.” So when she goes, “MOM! Look at that, it’s a huge blank timeline!!” Insert me going, “What??” Indeed, it was, as described, a huge blank timeline. Much like the ones I’d seen in some of the curriculum catalogs, and had thought, “Oh, good grief, we’d never keep up with that, and where would we even put it, and wouldn’t Ashar hate it if I made her do that?”

Well. After some negotiation, I am pleased to report that for somewhere in the range of $8 to $10, we are now ALSO the proud owners of the laminated Mark-It Timeline of History, which is now proudly taking up most of the door to my basement. In biggest news, it is no longer blank, because Ashar spent FOUR HOURS tonight filling in her choice of what ended up being 28 events from 4000 BC to present. Why four hours? Well…

To this point, we have, among other things: 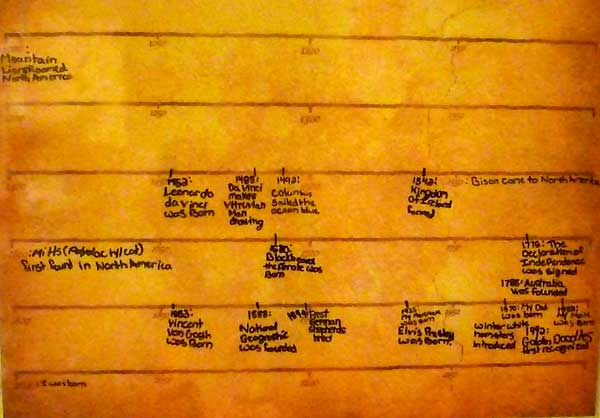 Honestly? By the time it got to be about 11:30 p.m., MOM was the one too tired to continue. I think she’d have been at it another hour if I’d had the energy. As it is, I feel like we not only covered about a year’s worth of history lessons, but we put them in more context than I ever remember from history classes. No, it’s not an exhaustive look at the history of the world. But it took things Ashar already knew about or was interested in and put them in perspective, and I’m pretty sure she’s going to want to keep filling it in as we go.

But now I need a nap.

4 thoughts on “Our curriculum-fair splurge: One big timeline of history”