Unschooling isn’t just about what Sarah is learning. 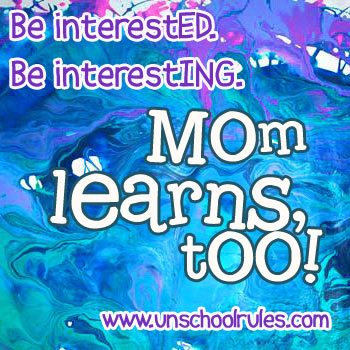 One of my friends, Karen Lee of A Radical Path, was recently talking in an online group of radical unschoolers I’m part of, and she described the role of the parent in unschooling like this.

“Be interested (in her and what she is doing and loves and in bringing new, fresh opportunities to her but without expectation, and be interestING. Be someone who is interested in life and learning yourself, pursue your hobbies, look stuff up yourself because *you* want to know something, and just naturally share it with her as you would with someone else.”

So I’m kind of not shocked, when I think about it, that Ashar has also been kind of in an “uninterested” phase lately. It happens – and we’re fine with that. But at the same time, I started thinking that I certainly wasn’t doing anything to get myself out of my funk, and that one, I could certainly address!

Dr. Cockell, or Professor Charles, as I call him in my head, is an instructor at the University of Edinburgh in Scotland. I signed up for a free five-week online course he’s teaching through Coursera called Astrobiology and the Search for Extraterrestrial Life.

And for the past three weekends, I’ve spend about two and a half hours split between Friday and Saturday nights watching his video lectures and taking quizzes.

I love it! I have often said that if perennial college student was a job option, I might take it. Not because I’m much into degrees (and boy am I NOT into student loans), but I love learning. What I don’t love is learning what someone else tells me I need to learn, or being forced to pay ridiculous sums of money in the interest of supporting an institution, not the acquisition of information.

So for me, Coursera is great – its courses are free, but rigorous. You get a certificate of completion – but ONLY if you do well enough on any in-course quizzes, exams, or assignments, and only if they’re done on time.

The interesting thing is, there are about 139,000 people taking this class with me. The discussion forums and Facebook group are actually too much to keep up with most of the time, and my fellow students range from gifted 12-year-olds to 70-year-old Ph.D.s and everyone in between, which makes it a MUCH more diverse experience than traditional college was for me.

So far, it’s been great. I’ve actually decided to take some other courses via Coursera in the coming months – like Modern European Mysticism and Psychological Thought, and Fundamentals of Pharmacology – so I’m sure I’ll be writing more about them.

The thing is, I really want to re-invigorate my own joy in learning. I truly believe that the best way to be a good learning role model for Ashar is to love it myself. That’s the great thing my parents did for me, and I want to be able to do half as good of a job for my own daughter.

So I’m hoping to make this an occasional series – Mom learns, too. I hope you’ll comment and share what YOU are interested in right now, and maybe we can spark some ideas for each other!

Many thanks to Flickr user John Williams for the base photo that’s part of our the “Mom learns, too” logo, and again to Karen Lee of A Radical Path for sharing the brilliant reminder to be interested and be interesting!

6 thoughts on “Mom learns, too: How I’ve gone back to college (sort of) to study astrobiology”