Ashar, like many 17-year-olds, lives and breathes music. She loves nothing more than popping on her Beats headphones and discovering new favorites or enjoying old ones, singing along, watching music videos… but, until about three months ago, she’d never played music herself outside of a disastrous two-week flirtation with the flute in fourth grade (and we’re SO not counting that), and she had no idea about any music theory concepts.

That all changed when we found a great local music teacher, who’s been instrumental (see what I did there?) in helping Ashar build a foundation of understanding to go along with her listening. She’s gotten better at singing and even started learning to play, picking up the basics of piano and drums and working on some deeper skills on her favorite instrument so far, the guitar.

One of the keys to why this is working out so well? Her teacher uses what I call the unschooling approach to music theory – focused predominantly on playing by ear and playing “real songs” right away. 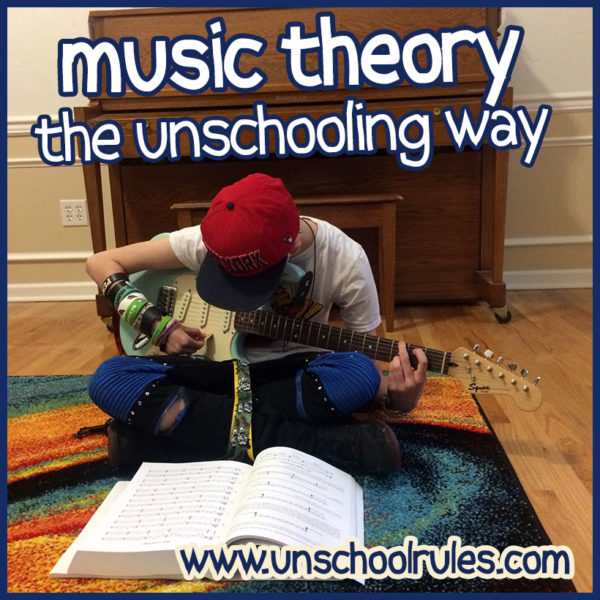 Except, one problem. I could help her read music. I could encourage her to practice. I could take her to lessons. But, despite more than 15 years of music lessons, I am horrendous at playing by ear.

So you can guess I was pretty stoked when, after about two months of introductory lessons, we heard about something called Garage Band Theory – described as “Tools the Pros Use to Play By Ear!”

I was like, “Sarah! Maybe this can help!” Her response was, essentially, a much politer way of saying “Anything would be better than your awful attempts to help me pick out ‘Lean on Me’ on the piano, Mom.” 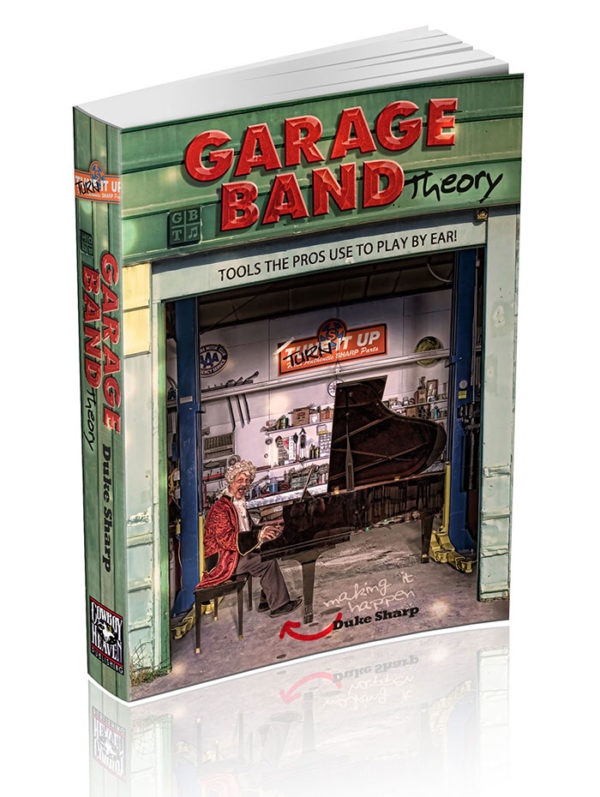 The traditional approach to music theory and music performance in our area is pretty simple: Kids start off learning to play some familiar songs on the recorder in third grade, pick a specialty instrument a year later, and practice playing from written lesson books daily for the rest of their school careers.

Disclosure: In exchange for the honest review of our experience which appears in this post, our family received a copy Garage Band Theory for free. We were compensated for our time completing the review, but all musical fun had was ours! This post also contains some affiliate links, which will make me a little bit of money to keep funding guitar lessons for my kid if you choose to purchase any of the products I’ve mentioned.

If you’re lucky, like me, you might have taken private music lessons before this, giving you a head start. I took piano from the time I was 5 until I finished high school, and while I got to be pretty technically proficient, I knew nothing about improvising until late in high school, and I don’t think I ever played by ear once I got beyond “Twinkle, Twinkle, Little Star.” It was as if my elementary music teachers got together and said, “OK, that’s cute for basic songs, but now we’re going to show you the real way to play – by reading music.”

There are definitely some great alternative approaches, like the Suzuki method, and I had some AWESOME music teachers who made me really love performing, but all in all, it wasn’t until I started to get beyond the technical motions into the soul of the music – and began playing stuff other than the lesson-book drills that I hated – that I really started having the most fun.

That’s the experience that I wanted to give Ashar when she wanted to study music, and why the “unschooling approach to music” is working so well for us.

In the intro to Garage Band Theory, author Duke Sharp says something that really resonates with me. He mentions that he actually doesn’t like the phrase “playing by ear.” He says it’s misleading – and goes on to say that it “actually discourages people from developing a skill they already use unconsciously and naturally every single day.”

He gives some great examples: You don’t have to wait for the DJ to tell you who’s singing when you hear your favorite song on the radio. When one of your family members walks down the hall, you can probably tell who it is. You can tell if it’s your dog or the neighbor’s barking. Heck, you can probably belt out a passable “Happy Birthday To You” in a crowd even if you’re generally a terible singer.

And that, he says, is exactly what it takes to play by ear – the ability to listen well, comprehend, and, when called for, turn that information into making a sound in response. And all of that is natural.

That was hugely eye-opening for me. Music “theory” and “performance” that stem from a natural exploration of sounds that you enjoy? Whoa, this “garageband” thing sounds like an unschooling approach to learning music!

In both her weekly lessons and our time exploring Garage Band Theory, Ashar has been able to just have fun. Most of her musical learning starts with listening, starting with the music of the Beatles – which is both where her music teacher starts, and what Duke Sharp recommends in Garage Band Theory! She doesn’t have to practice the same song over and over; instead, she’s learned to pick out chords on the guitar and piano and put them together into songs she loves, like “Radioactive” by Imagine Dragons and “Lucy in the Sky With Diamonds” by the Beatles.

We’ve just gotten started with Garage Band Theory, which is a SUPER-deep resource. The book works back and forth between reading, playing exercises and answering some brief questions in a workbook-style format.

The basic idea? When you can really understand something – what it’s called, what it does and how it works – that’s when you can use it as a tool to create.

So while Garage Band Theory starts with the names of the notes and the types of chords, it skips the basic drills of playing Middle C in 50 different ways and moves into practice identifying them as they appear in popular songs and using that to help you build recognition. When you hear the three NBC bells, you’ll say “Hey, that’s just an inversion of a C chord!” Fifteen years of music lessons and that never occurred to me until Garage Band Theory.

Ashar’s focus right now through her music lessons is simply familiarity – picking out songs, getting comfortable with the guitar, starting to play things she recognizes. While she’s probably not ready to devote the time to really working through the Garage Band Theory system, we’re excited to have it as a resource to help her get more familiar with some theory basics as she continues her musical explorations through lessons! (The author, Duke Sharp, notes that taking professional lessons is highly recommended – the system works best as an enhancement to that kind of teaching, not as a replacement.) 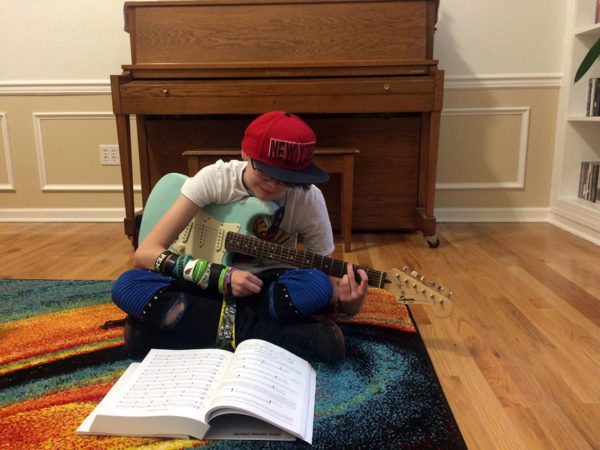 Ashar had never seen tablature shorthand for guitar before – only full pictures of the first few frets. When we worked on how to read it using Garage Band Theory, her mind was blown!