Is your family ready for summer yet? While we don’t really have “summer break” because unschooling means our lives flow year-round, we love this season anyway as it seems to give us more ways to spend time living and learning together.

That’s what I blame for the lateness of May’s wrapup post – we’ve been busy exploring lots of cool stuff in our town, so I didn’t make time to sit down and write this summary until now. (As always, if you want a more frequent peek at what we do, you can always find me on Instagram and Facebook.) 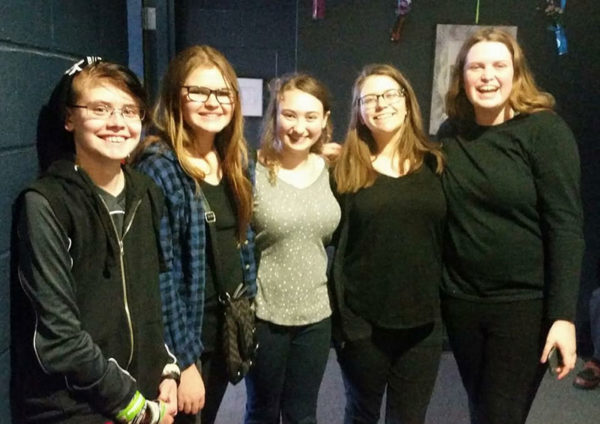 Ashar, left, and her friends from the crew at DreamWrights. I can’t say enough good things about these people. Side rant: I can’t stand it when people complain about teenagers. MANY teenagers are awesome. These are some of them. 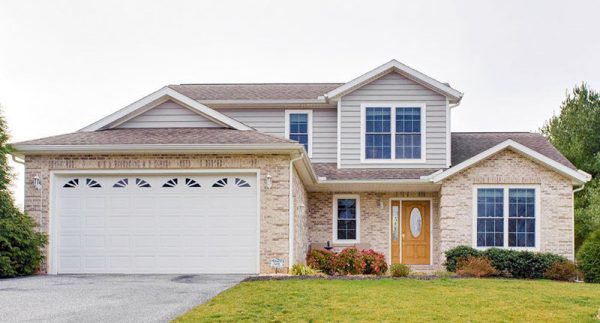 This is our new house!

We officially moved in to “Essex Manor” (because we live on a street with Essex in the name) on May 12, did some whirlwind unpacking and decorating, and celebrated with a three-day open house on Memorial Day weekend.

Disclosure: This post has some affiliate links. I only link to things we legitimately use and recommend, so if you see such a link, it's because we really do believe in the book or item!
We’re pretty much done unpacking and decorating, with just a few small projects left to go. That took up a LOT of our May, though we had a lot of help from family and friends, including Kaitlyn’s mom, JoAnne, who came to stay for two weeks and helped us a ton.

I mentioned this last month, but it bears repeating: On the unschooling front, a lot of the conversations around mortgages, escrow, commissions and more went into Ashar’s economics credit on the transcript for the year that just ended. It was a HUGE piece of learning for all of us.

I’m hoping to do a photo post showing off the new place sometime in the next month or two. I have 16 pieces of my art at a gallery show right now, so there are some big spaces that will later have art in them, and I want to wait until that’s done. 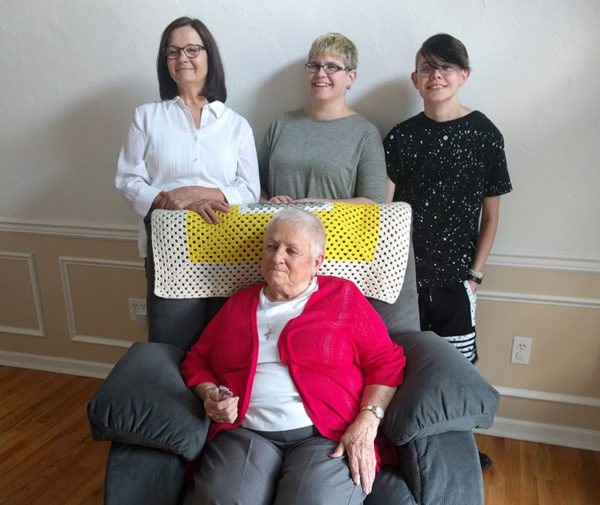 My oldest sister Linda, me, Ashar and Mom on Mother’s Day.

I know I’m missing things here, but a few highlights: 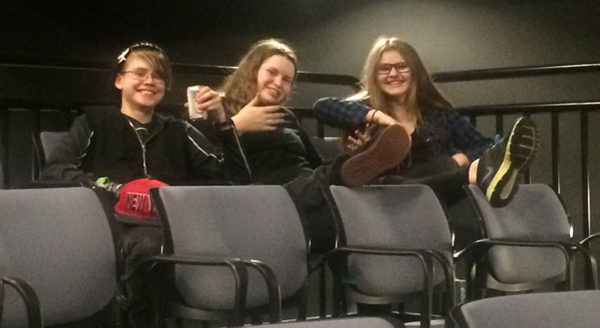 I told them “Look awesome.” They said, “We’re always awesome!”

Ashar kept going with her Rock Band classes with Rod Goelz of Music at Metropolis, who I mentioned before is unschooling-minded guy who really clicks with Sarah. They work on the fundamentals of rhythm, harmony, vocal and instrumental performance and playing by ear together.

May was also big in the theater world, because we had the performances of the show Ashar was on crew for, Peter Pan and Mary, a locally-written play premiered at DreamWrights, our local family theater.

After putting in four or five hours a night, sometimes five nights a week, for more than a month, it was amazing to see it all come together in the shows. She had an amazing time and made some great friends, which was really cool.

Expect to hear more theater things in next month’s roundup; starting today, Ashar is spending all day every day at a two-week Shakespeare immersion camp at OrangeMite, our local Shakespearean company. They’ll put on a production of The Tempest, which I think is super-cool, and of which you can be assured pictures will follow! 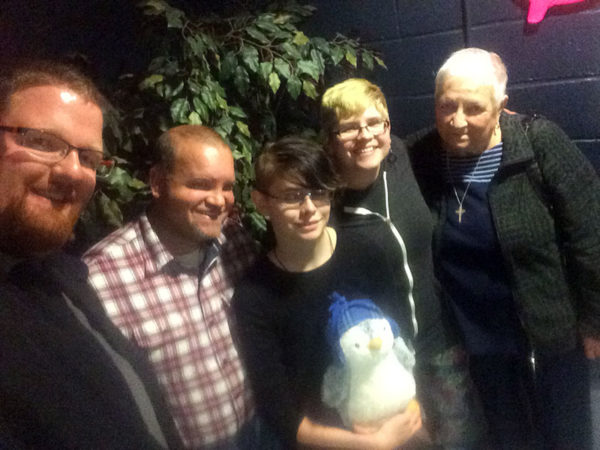 Kaitlyn, Chris, Ashar, me, my mom and Plaid Pengin at one of the Peter Pan and Mary shows at DreamWrights.

We didn’t have a ton of time for movie-watching, but Ashar and Chris started watching Darkplace, a show of the “so bad it’s almost good” variety.

We also found time to go to the movies and catch Guardians of the Galaxy Vol. 2 and also saw Sing, which was super-cute. 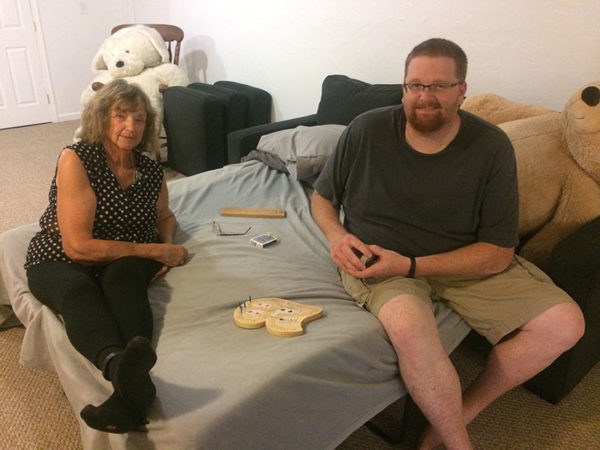 Kaitlyn and his mom, JoAnne, play cribbage on the guest bed in the rec room. Note Dudley (white dog) and Einstein (large bear) looking on.

As always, we like to spend at least one night a week gaming, though with the move that’s gotten a little less frequent than we would like.

One of the coolest things about Kaitlyn’s mom visiting is that his family is big into cribbage, and on this visit, she and Kaitlyn taught Ashar to play.

We also got to do the mutating killer virus episode of Escape Room: The Game – from which we did escape!

Ashar also had fun playing a new tabletop beanbag game (think cornhole, but little) with a young friend who came to the open house, and we were excited that we got her basketball hoop set up at the new place. We weren’t sure how that would work out, because our driveway isn’t level, but we found a way to do it facing the road on our non-through-street. 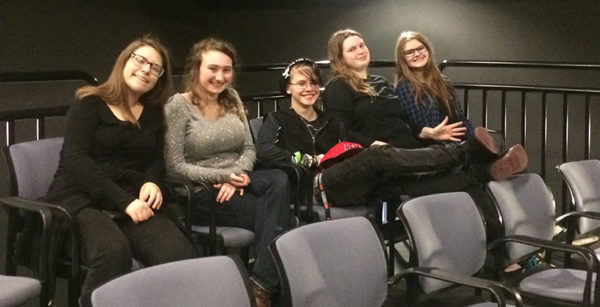 More of Ashar and her DreamWrights crew.

This month in our family’s Universal Yums subscription, we got to try snacks from Japan.

I particularly loved the beef-flavored cheese-puff-type things, which I fully admit is weird. Kaitlyn loved these little cookies shaped like hamburgers. Overall, though, Japanese snacks were less to our liking than some of the other countries. Next up is Mexico, so we’re hoping for a lot of chocolate and spicy snacking.

What’s really cool is that we try to make an evening out of our taste-testing. We all try a little bit of each snack, we rate them, we look up facts about the country and we have a good time.

I’m not an affiliate of Universal Yums, but I can definitely HIGHLY recommend it. You can definitely look forward to hearing more about this in our roundups as long as our subscription continues! 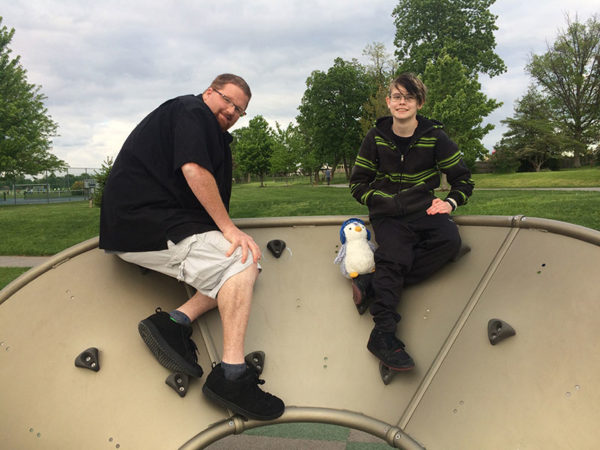 Ashar, Kaitlyn and Plaid unwinding at one of our nearby parks.

Walking: Our old neighborhood had a nice loop for walking, and our new neighborhood is even more walkable, with no through-streets and only one road entering/exiting the development. We also have a walking path from the development to a nearby elementary school, so we can walk over and play on the swings and stuff!

Playing in the rain: Right before we moved away from our old house, we had a huge downpour, and Ashar had fun going out and playing in the storm. She’s big into water lately, loving to get soaked, so it was a ton of fun and a nice way to say goodbye to the old place. 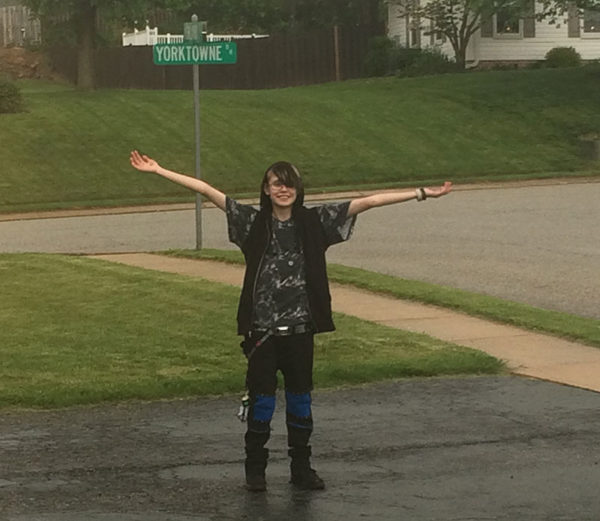 Playing in the rain on one of our last days at the old house.

Mother’s Day: What’s that? We moved on Mother’s Day weekend? Well, of course that meant we had to go out to dinner. The five of us, plus one of my sisters and her husband, all went out to hibachi, which was perfect. 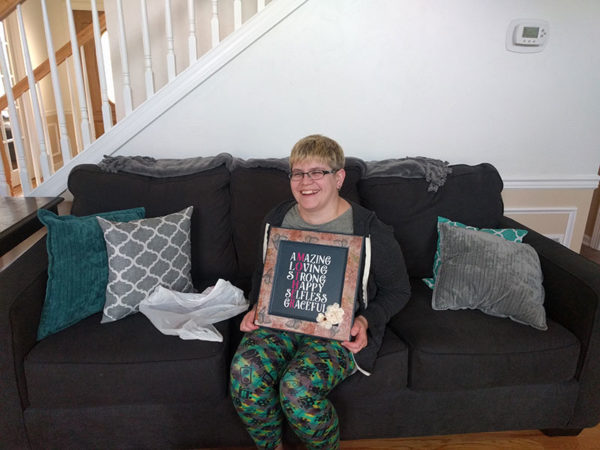 So I’m making a stupid face here because I realized my Mother’s Day present said I’m graceful. This is not particularly true. As evidenced by, you know, this photo.

2 thoughts on “Unschooling: Our May 2017 adventures”