If you’ve been reading here for a while, you know that my daughter, Ashar, is no huge fan of organized math. We’re HUGELY into real-world applications, like math in gaming, but even the concept of online math “educational games” usually gets Ashar’s anti-math radar up.

Disclosure: In exchange for the honest review of our experience which appears in this post, our family received a free subscription to Knowre. We were compensated for our time completing the review, but all fun had was ours!

That said, she’s also been tossing around the idea of taking a few dual-enrollment classes at our local community college later this year, and while did already pass the basic math placement test, she knows she could take some more interesting science courses (one of her passions) if she can test even higher, so she’s got some motivation to up her game.

So when we heard about Knowre, a gamified adaptive math program designed to identify and give focused help in “gap” areas, I thought “Hmm, I wonder if she’d go for that!”

When Ashar found out we could try it out, not only was she on board, but when I explained how an “adaptive” app works, she said, “Hey, that’s kind of cool!” 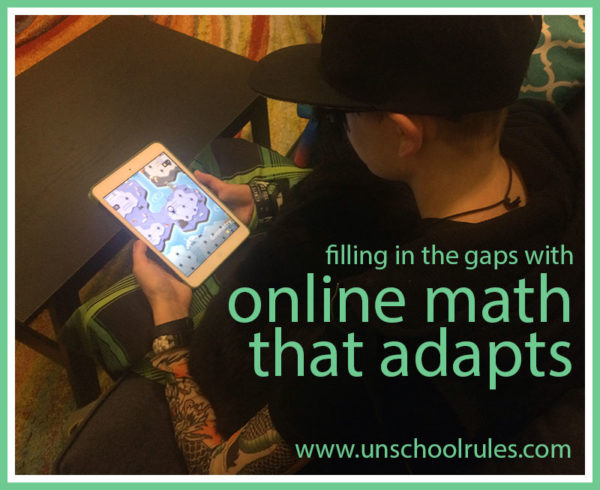 Since we don’t follow a specific curriculum plan, we figured we’d try out all the Knowre modules – starting with Pre-Algebra and Algebra 1, then dipping into geometry. That way, she could see what she needed, without missing any foundational skills.

As Ashar predicted, Knowre’s adaptive system really is cool. She didn’t have to watch or read a lot of explanation on concepts she understood, and there was plenty of support – video and text-based walkthroughs alike – for the areas she needed to review.

I also liked their comic-style intros – learning via graphic novels has long been a love of mine, so that style is always a win for me. These intros, and the program as a whole, focus on applications of the concepts being discussed – also a super-huge win.

Since I was so into the comics, I was happy to see that Knowre also offers a Math Comic Digest – an email subscription giving both comics based on the topic of your choice and ideas on how to implement and teach the topics contained in them. Those are probably more closely targeted toward classroom teachers – who could ALSO really benefit from Knowre – but I’m getting a kick out of them too.

We’ve also found the Knowre iPad app really convenient. The coolest part? Handwriting recognition – you can use your finger or a stylus and write out the answers, and they automatically get translated. (Bonus: Motivation to write legibly!) 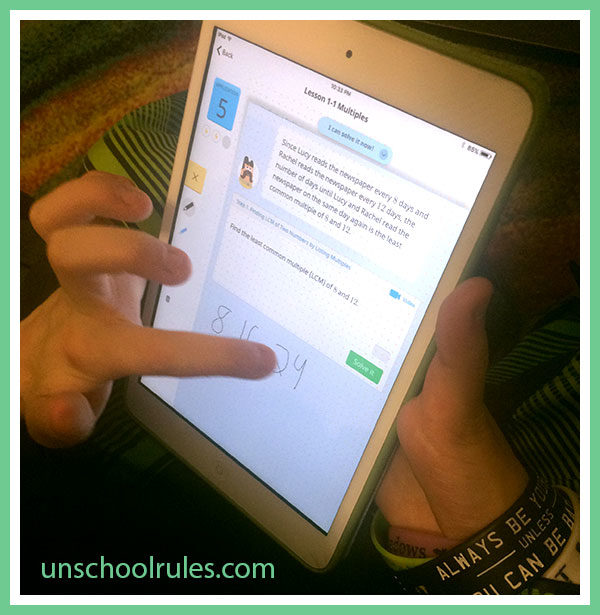 A new approach to online math

All that said, probably the best part of the Knowre system, for us, is the Walk Me Through approach. I have always been great at math (majored in it in undergrad, even) but terrible at step-by-step work-showing and explaining (hence why I didn’t become a math teacher with that degree). So when Ashar would get confused partway through a math problem back when she was in public school, I just had no idea how to jump in partway through and pick up where she was.

That’s a key to the “adaptive” concept – not only does it adjust if she isn’t following what’s being presented, but it figures out where the issue is so she can move on successfully.

It’s actually helped me “learn how to teach” a lot better, just using it along with Sarah. While I rarely sit down and give anyone – Ashar included – formal math lessons, now I know how to help better when she or anyone else does have a question!

Win a subscription to Knowre

I’m lucky enough to be able to be part of a Knowre giveaway. 10 lucky readers will get a one-year Knowre subscription, including all four programs – Pre-Algebra, Algebra 1, Geometry, and Algebra 2.

Also, if you subscribe before Aug. 31, 2017, Knowre is offering a special discount – $29 per user per year. Your license starts right away, and will automatically expire a year later. Not only do you get access to all four programs (Pre-Algebra, Algebra 1, Geometry and Algebra 2), you can use Knowre both online and through an iPad app.

I hope you’ll find this new way of filling in the math gaps as helpful as we have!