Our unschooling in June 2017 had one huge focus – Shakespeare. But amid a hectic rehearsal schedule and several sold-out performances of The Tempest, we found time to explore some of our local parks, read some cool books and celebrate Father’s Day. (And as always, if you want a more frequent peek at what we do, you can always find me on Instagram and Facebook.) 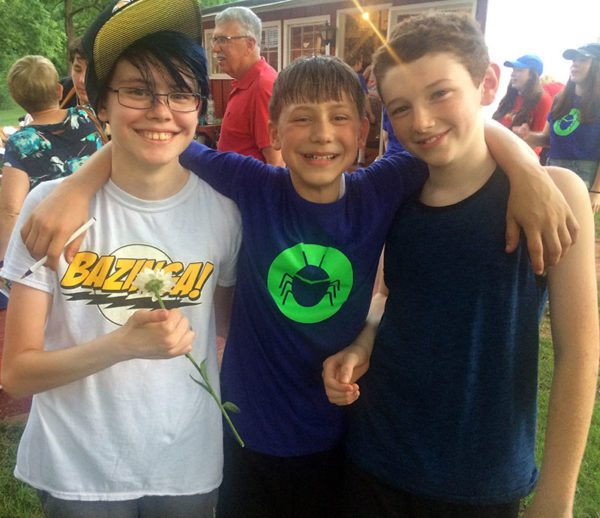 Ashar played Trinculo the jester in The Tempest, and her two awesome friends were Stephano the drunken butler and Caliban the octopus-monster. They all did amazing and worked so well together!

Ashar had the chance to take part in a production of The Tempest through our local Shakespeare company, Orangemite Studios and their Dover Youth Shakespeare Academy. These kids – generally ranging in age from about 9 to 15 – had two weeks to learn a slightly abridged version the play, audition for parts, rehearse, create their own props, learn blocking and stage three performances, two of which were sold out! Oh, and the performances were in a converted barn with no air-conditioning, and it was over 90 degrees and humid.

Disclosure: This post has some affiliate links. I only link to things we legitimately use and recommend, so if you see such a link, it's because we really do believe in the book or item!
They worked SO HARD. And the shows – which we got to see two of – were excellent! We told Ashar that she now has more Shakespeare experience than her hero, Norman Reedus of The Walking Dead, which she got a kick out of.

She came home the first night after having done a read-through of The Tempest and said she wanted to audition for the role of Trinculo, the jester. That night, she started memorizing his introductory speech, which includes a ton of hilarious antics based on whether a sleeping creature is a man or a fish. “Smells like a fish! A very ancient and fish-like smell!” She also got to say a line about horse-pee. If you know Ashar, you know this role was made for her.

I don’t want to make it sound like it was all a walk in the park, though. She worked REALLY hard – at camp from 9 a.m. to 3 p.m. and practicing most of the evening at home to learn her lines and blocking. She really struggled with emoting, especially when she was tired, and at one point, she said, “I just can’t do this.” We all worked together to help her figure out how to get past the things she was struggling with, but I admit that when I sat down for the opening show, I was mostly thinking, “PLEASE let this go OK!”

It didn’t go OK. It was PHENOMENAL. She AND the rest of the cast knocked it out of the park. And, in the category of “everyday miracles,” I thought it was absolutely perfect when, just as Ashar got to a line about an islander being hit by a thunderbolt, it thundered like crazy outside – and she paused, looked up, and said her next line with perfect comedic timing – “Alas, the storm is come again!” It was THE BEST.

She’s already talking about auditioning for Orangemite’s next production, Antony and Cleopatra, and we’re going to see their performance of Sophocles’ Antigone later this week (that was rehearsing during the camp).

Oh, and Ashar also wants to audition for a musical version of Beauty and the Beast at DreamWrights with some of her friends, and we’re going to watch more of her friends in DreamWrights’ summer Shakespeare performance of The Taming of the Shrew. 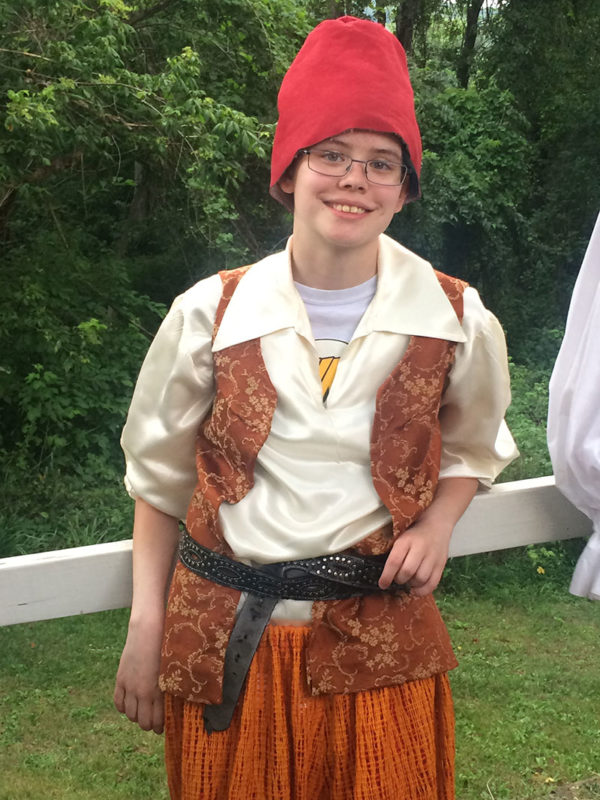 Ashar as Trinculo, the jester, in Shakespeare’s “The Tempest.”

What, you don’t think reading and hiking go together? Our library system has this really cool program called Get Outdoors York that is an add-on to the summer reading club. You get a booklet with 30 hikes listed, and at the end of each hike you find a plate with a rubbing on it. (Very similar to letterboxing or geocaching.) So far, we’ve found 11 of the 30, and even cooler, we’ve found some amazing places around our county to explore!

The best was a new-to-us swimming hole at a small park in eastern York County, complete with a rope swing so you can Tarzan your way into the creek, as well as a ton of great spots for wading! We also went to our favorite state park, Gifford Pinchot, and met a super-nice family catching fish who offered to have Ashar come fish with them. 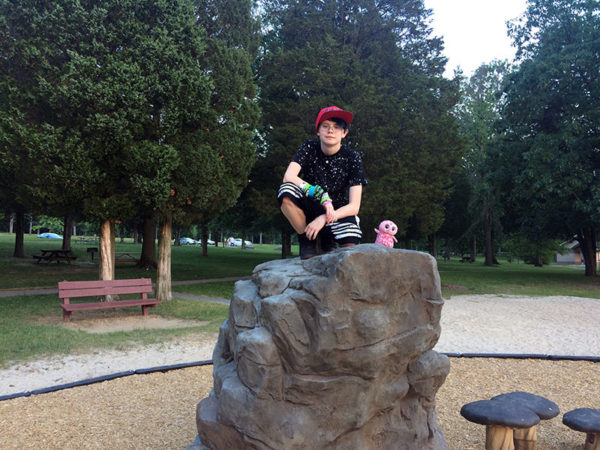 Ashar and Fwoops check out a (fake) rock at Pinchot Park, one of the state parks in our county, following one of our hikes to find a letterbox.

In addition, we did get to do some reading. Besides All The Shakespeare, Ashar got and devoured a copy of Plato’s Republic (which she’d been looking for for quite a while), we read more of Cross Kill by James Patterson, and, most interestingly, we found a Father’s Day gift for Chris that was book-themed.

See, Ashar and Chris like to read together, especially history-type things. And Chris LOVES old books, especially old schoolbooks; in fact, one of the coolest projects he and Ashar ever did together was when they went through an old geography book and wrote a blog post about it. It’s a neat way to have conversations about what the facts were as they were known at the time vs. what has changed.

They also have been reading together from Max Brooks’ World War Z and The Zombie Survival Guide, and Ashar finished Vol. 5, Vol. 6 and Vol. 7 of her Walking Dead comic book series. Pretty good for not having a lot of free time! 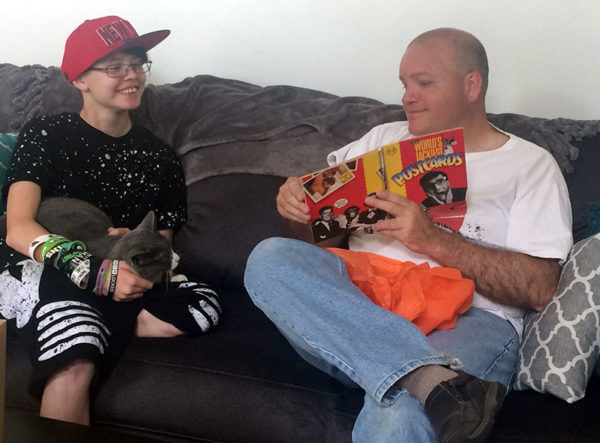 Chris shows Ashar and Mr. Angelino some of his tacky postcards (part of his Father’s Day gift).

We didn’t have a ton of time for movie-watching this month, but we did relax a bit with some of our favorite game shows on GSN and finally got to see Moana, which was really good. And made me cry. Because all movies make me cry. 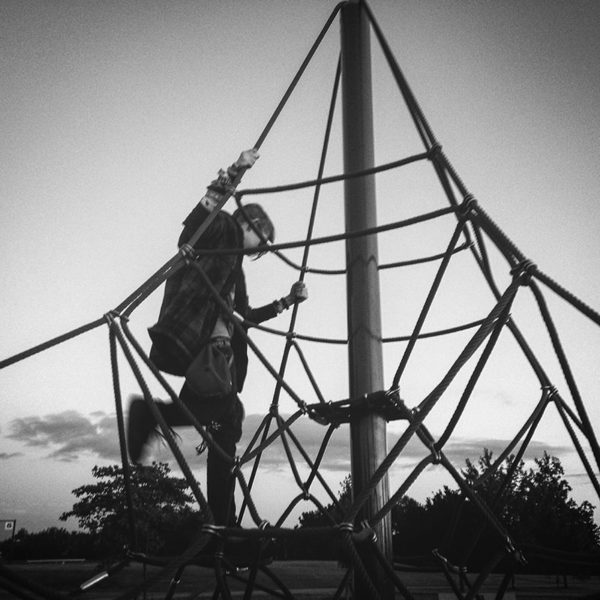 Chris took this awesome photo of Ashar on the climbing ropes at Cousler Park, a great spot near our house.

This was another thing that had to take a backseat this month. Other than some Uno Attack and Minecraft, and Kaitlyn’s new Wii U system with Mario Kart, we didn’t have much time for any kind of gaming! That said, we did get something cool from Kaitlyn’s parents – a Diabolo, one of those cool OUTSIDE-ONLY yoyo-type things on a large string, at which we are terrible but trying hard to improve. 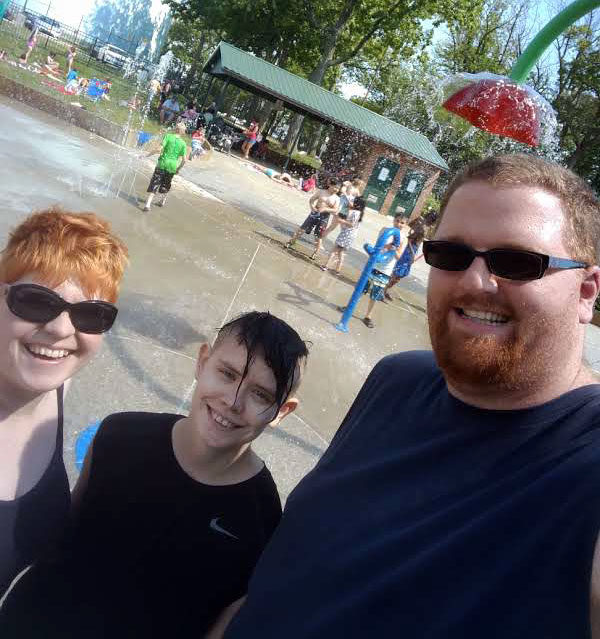 We had been planning to go to a family pool party out of state, but weren’t able to make it, so Kaitlyn and I tried to make it up to Ashar by taking her to our local splash park, this super-awesome free place where you can get drenched!

Camp counselor-ing: Our 4-H program has an awesome science-themed day camp for 8- to 12-year-olds called Survivor Camp, and this year, Ashar got to be a counselor. She had to be there at 7 a.m. – a crazy-early time for our family! – but she loved it.

Made in America Days: Made in America Days is a project of our county visitors’ bureau, because we are supposedly the “Factory Tour Capital of the World.” I don’t know about that as a claim to fame, but we do have some cool tours. This year, the alpaca farm Ashar works at for 4-H and its accompanying store were part of the tours, and Ashar went over to help show people cool things about alpacas! 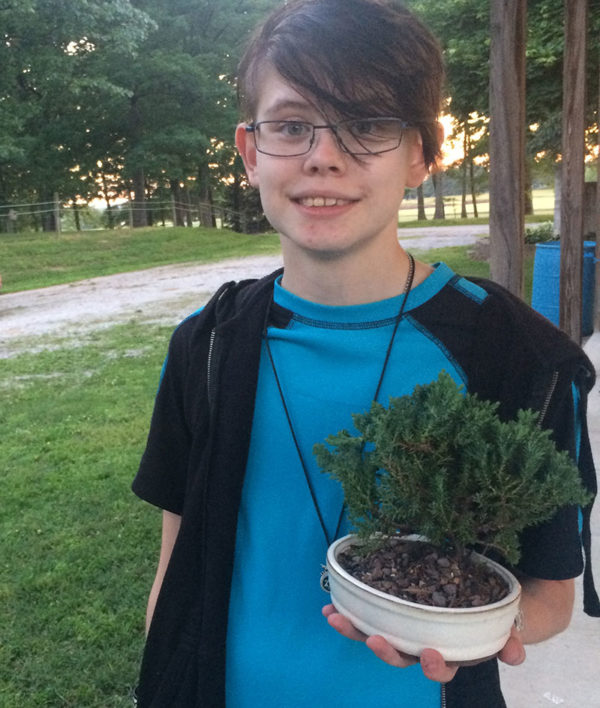 One of Ashar’s 4-H clubs made bonsai juniper trees as a project – here she is with “Pricky,” as she aptly named him.

Work permit: Ashar officially has a work permit, and hopefully will be applying for some jobs soon. Her availability was pretty limited by the aforementioned Shakespeare, and because she cannot drive, we have to figure out a place that’s a good fit that is either walkable or that we can get her to around everyone else’s schedules. But the paperwork step is done!

Pengin explosion: I’ve talked before about Pengins for Everyone, our family’s mildly crazy project to give away stuffed penguins – or, as we say, pengins – to anyone who requests one. It was kind of a ridiculous idea when we had about 100 pending requests, but then, in the last week of June, it got shared on a bird-lovers’ group on Facebook with 70,000 members, and got picked up by a bunch of freebie sites. Now we have something like 21,000 requests, received $1,600 in donations, are officially filing as a nonprofit, and are working on a magazine article feature. So, you know, no big deal. Except the part where we are TOTALLY FREAKING OUT. 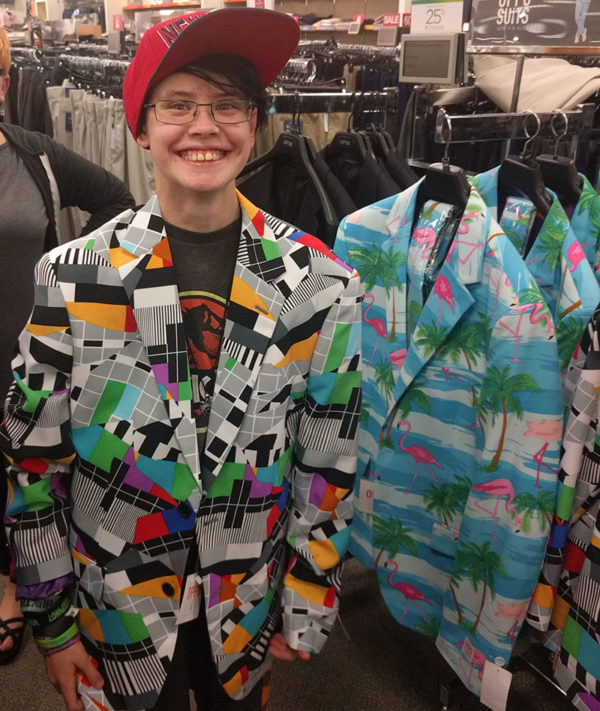 Kohl’s is selling these fantastic suit jackets. Don’t you want one? Ashar does!