I often talk about how I believe that real-world math is what matters.

You can, like our family, use an entirely real-world approach to math, with no required workbooks or textbooks. You can also use a super-structured math program. You can love math yourself, or be mystified by it. You can have a preschooler or a high-schooler, a child with math anxiety or one gifted with numbers.

In either extreme, or anywhere in the middle, I believe that knowing the real-world applications of the math you encounter is what’s most important.

While I’ve talked about this issue in many ways before, today I’d like to focus on a specific concern or question I hear, even among proponents of real-world math. Many people think it’s fine “to start with.” But the concern I hear above all others is this:

“If your daughter doesn’t learn algebra and geometry, how can she graduate?” 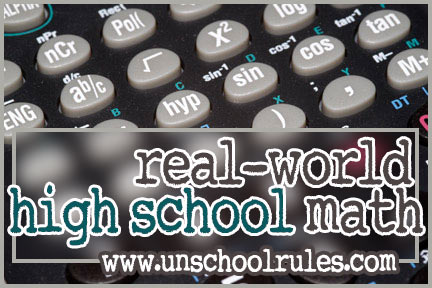 That’s what I want to address today, both by talking a little about our learning philosophy and by sharing some resources where you can read and explore more about math in the real world.

First of all, I want to point something out:

“Learning algebra and geometry” is not the same thing as “working your way through an algebra or geometry textbook.” It can be, but it doesn’t have to be. In Pennsylvania, our homeschool law doesn’t even specify that you must have a whole semester or year of those subjects; you must study math in high school, and it must include algebra and geometry.

It’s amazing the amount of times we talk about algebra in our family without ever mentioning “math.” I’ve said before that algebra is simply overlaying sets of equations onto the world around us, and the biggest thing we do to promote a real-world approach to algebra is to talk.

We talk about gas mileage in our two cars, one a decade old and the other brand new. We talk about when it makes sense to invest in something expensive – like a new microwave – and how cost-per-use works out to make it more effective to spend more money up front to spend less over time in some situations.

And geometry and its science counterpart, physics, are even more natural. Have you packed a full cart of groceries into your car’s trunk recently? Played sports? Fit things into your pantry?

And, again, what makes this work is the engagement. I’m not saying “never do math.” I’m actually saying exactly the opposite – stop relegating math to a subject on a chart for however many minutes a day. See how much of it is all around you, and share that with your kids.

It’s kind of fun. Play “spot the math” for a week, and see who can find the most examples. You might be surprised!

This post is part of a series through the iHomeschool Network about bringing homeschool subjects to life. Click the image below to see how my blog friends bring their favorite subjects to life, from history to art to nature study and more! 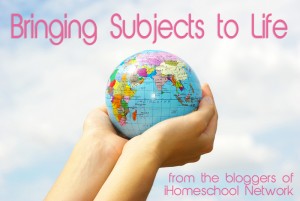