See that famous ship? That’s ALMOST how our Sunday night ended up – going down fast into a watery abyss.

Let’s rewind, shall we? About four months ago, as part of my continuing efforts to get our credit-card debt paid down, I took our cable package down one level. Saved close to $20 a month, and no noticeable loss of usefulness. Great, right?

About a week and a half ago, Ashar received the April National Geographic, featuring the Titanic (in honor of it being the 100th anniversary of the sinking) and found an ad for the huge two-hour special about the crash, featuring James Cameron, on the National Geographic Channel on TV. She marked it on our calendar and everything. We were told, during Easter dinner, that we would all have to watch quietly, so she could hear every word.

About an hour before it was to start, Ashar went to watch one of the “prequel” shows, about another ocean liner disaster.

About two minutes after that, huge tears were rolling down her face, as the TV cruelly told her, “You do not have access to this channel.” Cue Intense Mom Panic.

About two minutes after THAT, I was on the live chat with Comcast’s tech support, only to be told (and I later found out from a friend who works there, that this is not the case), that it would take 12 to 24 hours to get access to a new channel, even if I paid for the upgrade immediately.

Thankfully, we scraped together a plan. I put out the SOS on Facebook, seeking someone with a higher cable budget than mine to tape the show, and my great friend Steph was our lifeboat. (STEPH, YOU ARE AN ANGEL. BLESSINGS ON YOU.) Chris, meanwhile, opted for the immediate distraction, rearranging the deck chairs, if you will, and asked Ashar if it would help make it up to her if we all went to see Titanic (the movie) in 3D. Thankfully, Ashar’s answer was yes, and the three of us headed to the movies for the next three hours, watching the fictionalized version of the wreck almost in real time.

We’d talked in advance with Ashar that this was a “grown-up movie” in some places, and she was incredibly mature about it. Moreso, I think, than the teenagers a few rows behind us! Meanwhile, while Ashar was a little weepy at a few spots, I was a total waterworks. Afterward, Ashar says, “Mom, I think you were crying at the one part.” I said, “Why don’t you just ask what parts I wasn’t crying at? I cried when they got on the stinking boat!”

So, around 12:30 in the morning, we finally got home, had a fairly quick discussion about what was fiction and what was non-fiction about the movie we’d seen, and everyone was off to bed. (Hence, no end-of-day Sunday blog post for me!) Steph dropped off the tape this afternoon, and we plan to watch it as soon as we’re all home for the command performance.

Meanwhile, the other big news from yesterday was also ship-related; we went to visit our friend Jim Lewin, owner of The York Emporium, because he’d let us know Saturday that he’d found a replica copy of the New York Times about the Titanic sinking for Sarah. We picked that up… and we also picked up a sailboat for $16 and change. 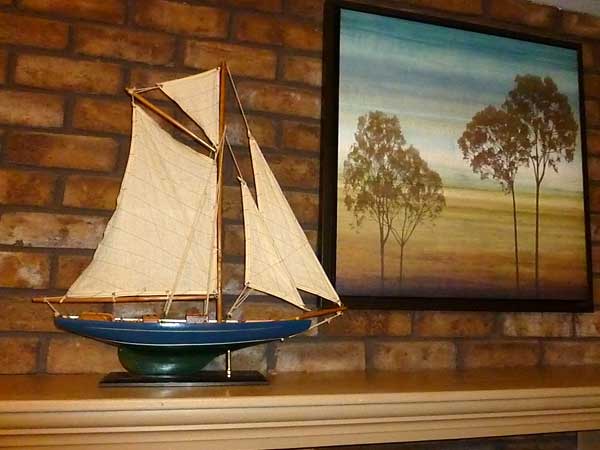 I’ve always wanted a sailboat… not so much always wanted one on my mantel, but it kind of looks good. At least the colors match! And Ashar just loves it. She found similar models online selling for MUCH more, so she’s convinced she got a great deal. (Next up: She wants to get and build this Revell RMS Titanic model kit… thankfully, she likes this reasonably priced one, and not the $2,000 one!)

Finally, just for fun: Our family project earlier in the day Sunday was to try to bring some much-needed organization to the main floor of our house. We really, really needed a place to put our books, and thankfully, my mom found a bookcase she no longer needed in her room, and we’ve place it alongside the sofa, where it’s supposed to pull double duty as an end table and as a “save Joan’s piano from having books piled all over it all the time” piece of furniture.

The Titanic books and newspapers occupy a place of honor on the bottom left. Unfortunately, Huggles, our three-legged tiny cat, also wants to occupy that place of honor, and Mr. Bill, our 17-pound Baby Huey of a cat, wants to displace Huggles using any means possible, including “overflowing his belly off the top shelf onto him.” 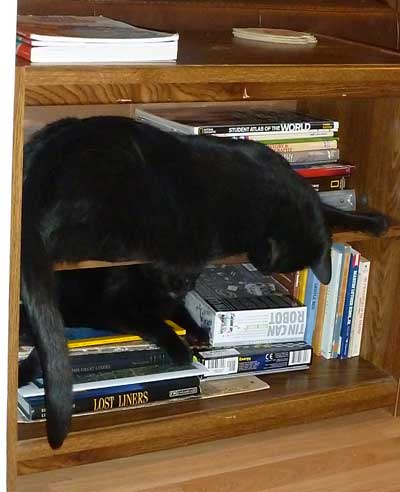