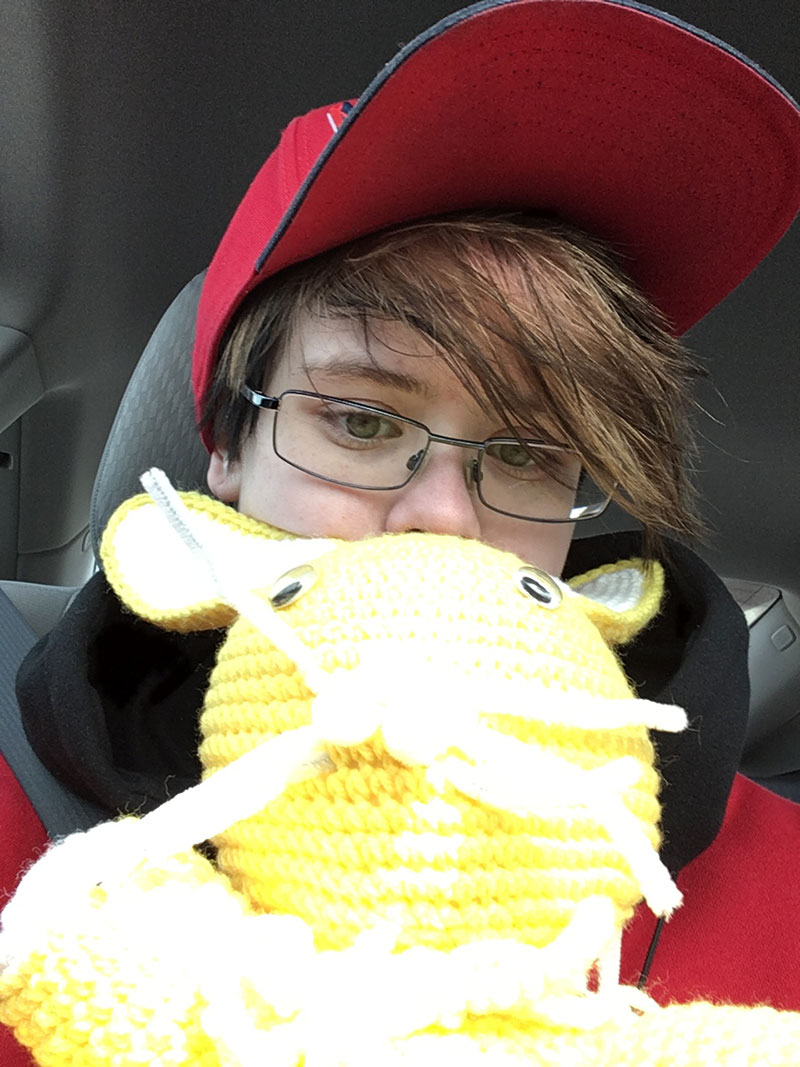 Ashar and Chris picked up this new friend, Whiskers, at an antique store.

April was a bunch of unschooling fun, and one REALLY BIG thing happened – we are officially “done” Ashar’s compulsory education under Pennsylvania law! We’ll be continuing to wrap up the things we do together as a family (and the learning that goes with them) in posts like this one, but I wanted to take a minute and celebrate that milestone!

(As always, if you want a more frequent peek at what we do, you can always find me on Instagram and Facebook. You can also check out our archive of previous wrapups here.)

So we’re done. Final paperwork submitted, nothing else required… right?

WRONG! Of course there’s a graduation party. We’re hosting a cookout and backyard graduation ceremony May 27 for Ashar, and I have a HUGE favor to ask of all of you. Ashar had really wanted to host a HUGE party, and for various reasons it’s not going to be nearly as large of a shindig as she’s dreamed of.

That’s where you come in. If you like reading about Ashar’s journey here on Unschool Rules, would you consider sending her a card or postcard with your best graduation wishes? She’d LOVE that (she loves getting mail) and it’d be a great way to extend our celebrating.

You can mail cards to:

(Don’t freak out, privacy people. Our address has been all over the internet for years. It’s not a biggie.)

And thank you all in advance for any love you’re willing to send Ashar’s way. It means a TON! 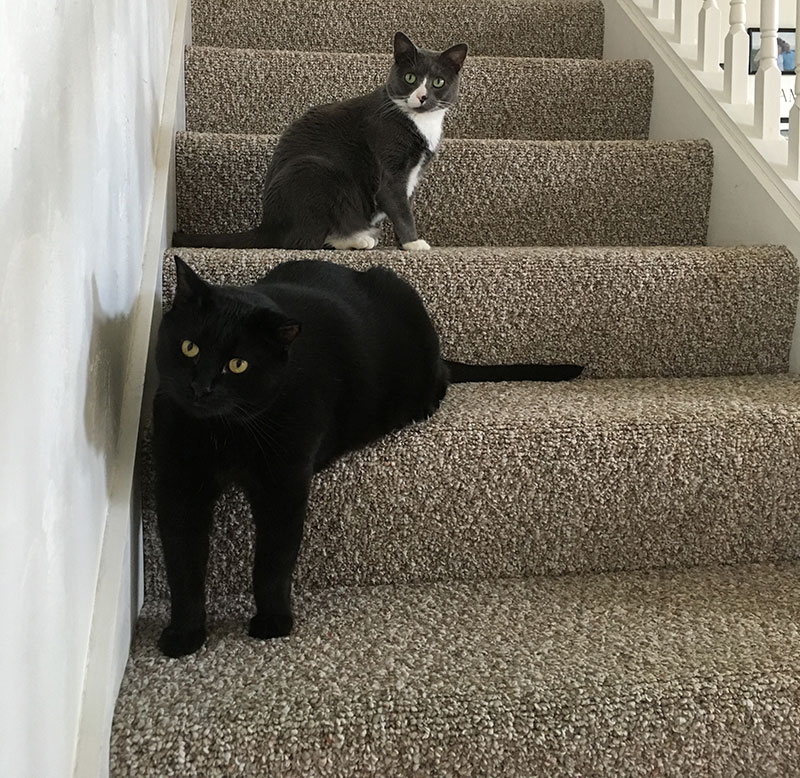 I talked last month about how we’d recently discovered Outschool. It’s a platform for independent online K-12 classes taught by all sorts of people – from certified teachers to hobbyists to trade professionals – and it’s amazing.

Disclosure: This post has some affiliate links. I only link to things we legitimately use and recommend, so if you see such a link, it's because we really do believe in the book or item!
We’ve been doing mostly single-session classes, which range in price from about $10 to $20 an hour, but in April, Ashar completed a six-session Shakespeare roundtable for teenagers, which was $75 for the full course.

In addition to the classes I mentioned in March, Ashar has now completed three courses in a series called “The Butterfly Effect,” which is a look at a famous person and how that individual changed history. They’re taught by an awesome lady named Barb Ve, who Ashar loves. In April, we had:

She’s signed up for several May courses, including:

I cannot speak highly enough about Outschool, which has been super-fun for us. 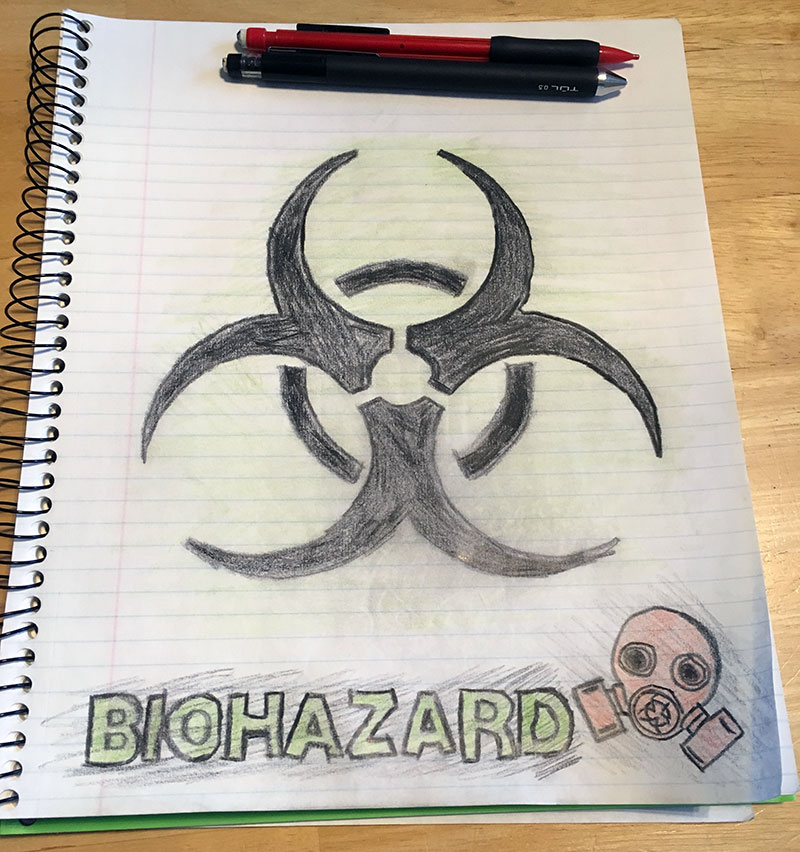 Ashar’s biohazard design, compiled from a few different reference images. You can’t see it well in this image, but she has some great faint green shading behind the main biohazard symbol.

One thing Ashar has contemplated as a future career is tattoo artistry. She did a bunch of reading and internet searching and found out that the best place to start with that at her age (since you can’t begin tattooing in Pennsylvania ’til you’re 21) is to build up a good drawing portfolio.

Since then, she’s spent time almost every day working on art! Right now, she’s mostly tracing outlines from source images and then shading and coloring them to her liking, but she’s hoping to move up to some freehand drawing soon. She’s got quite the portfolio – everything from standard tattoo-style designs to images of Norman Reedus’ face.

Ashar is also interested in photography – both modeling for photos and taking and editing them. So one night in April, she sat down for more than an hour with my best friend, Nina Myers, who runs her own photography business called CM&M Photography. Nina told Ashar all about different kinds of lenses and flashes, how she’s built her skills and more. It was a huge hit for both of them! 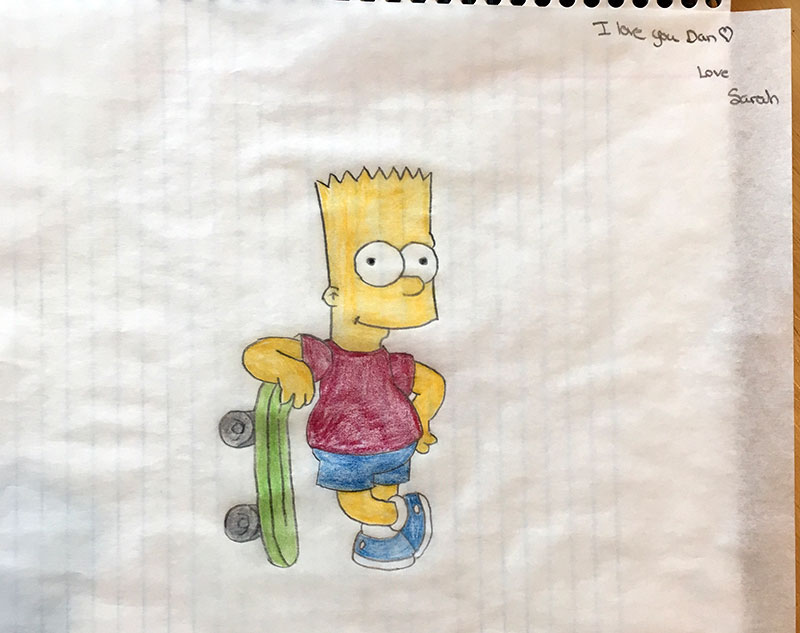 Ashar made this Bart Simpson (traced from a reference image) for Kaitlyn, who is a big fan of The Simpsons.

As part of a super-cool opportunity from Candlewick Press, Ashar and I spent a bunch of time with a set of new books, including:

We also read a whole bunch of Shakespeare plays, including a super-fun thing Ashar planned in which she, Chris, Kaitlyn and I acted out scenes from a good half-dozen of them for my mom in our living room! (And she got into some of the sonnets of Shakespeare this month as well.)

Ashar also dug heavily into a book called True Crime, which is a collection of real newspaper articles about crimes from the 1800s to present. 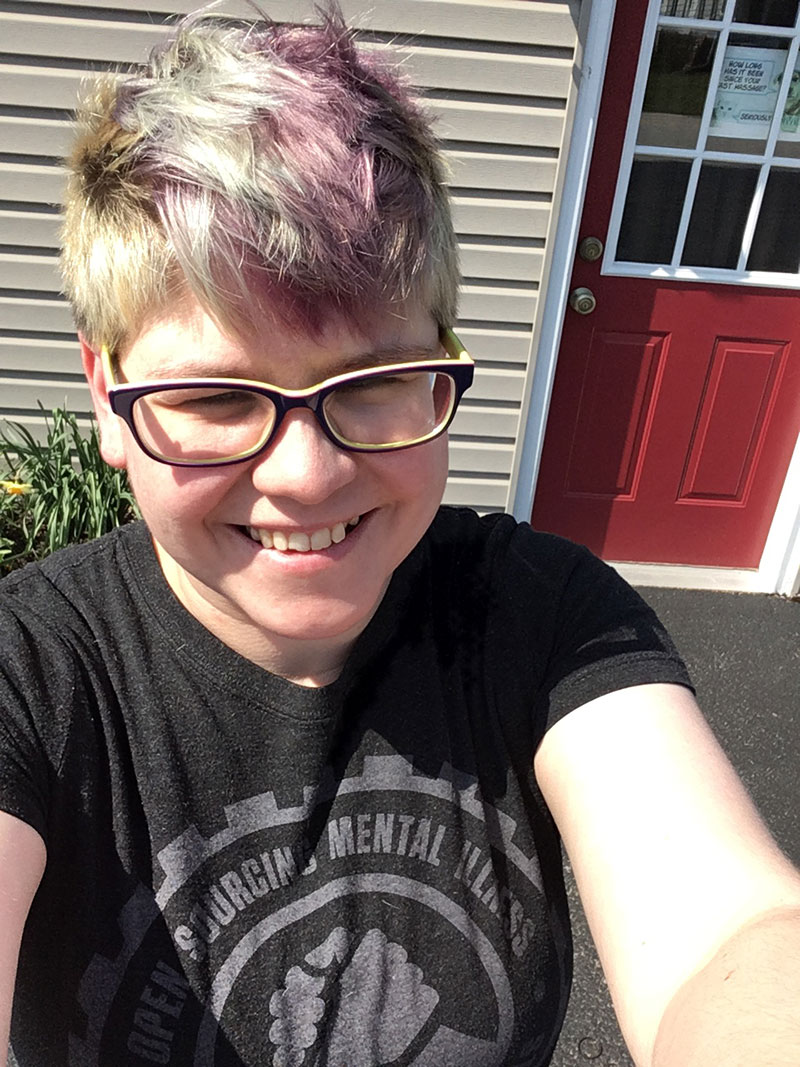 New hair for me. 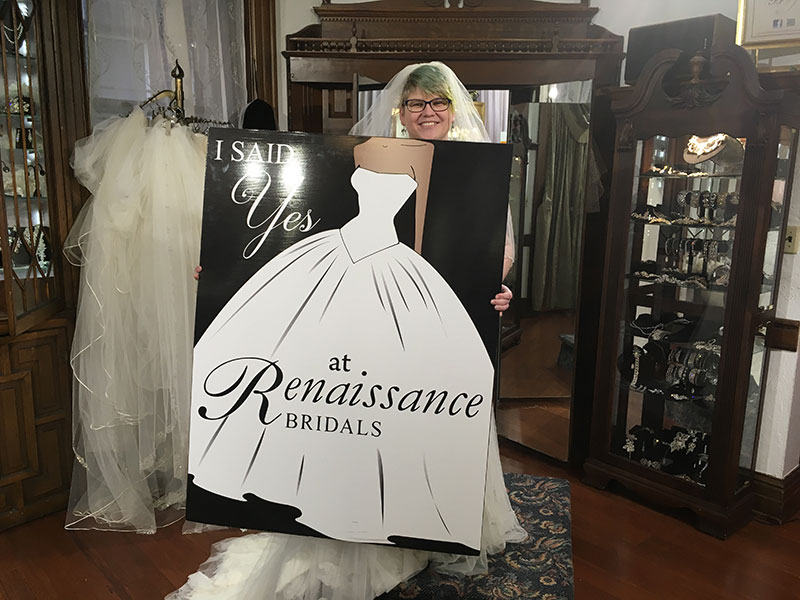 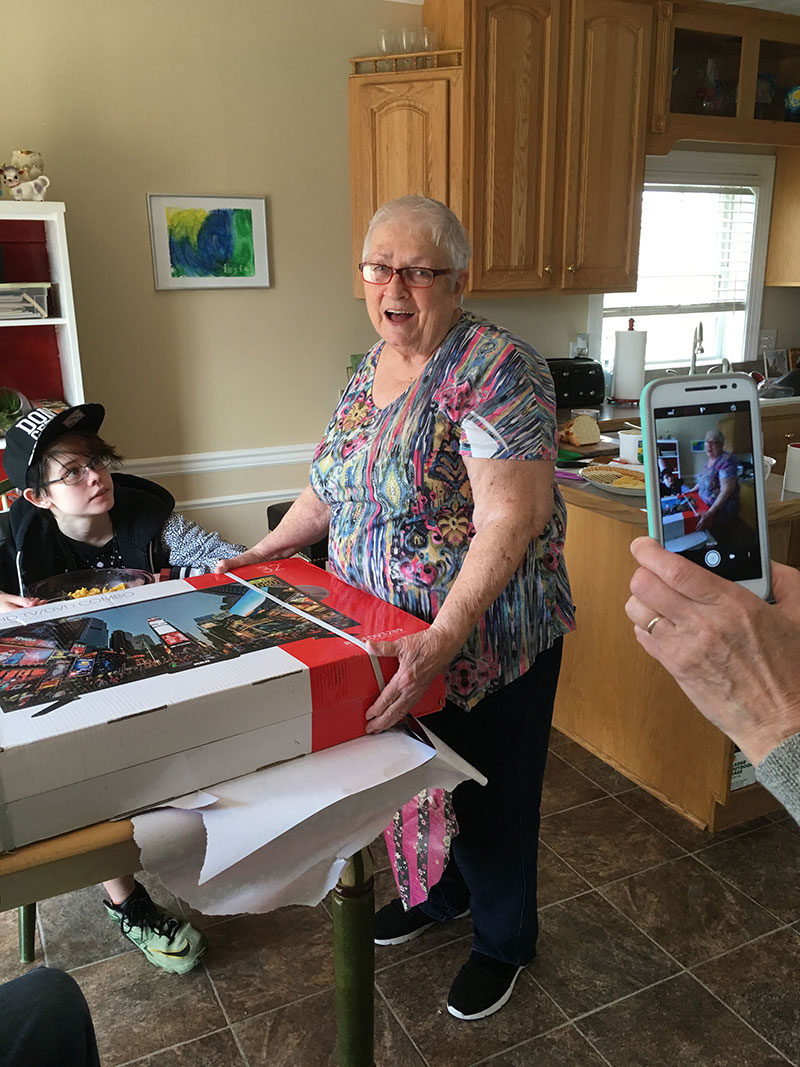 We celebrated my mom’s birthday with family on Easter, and she got a new (and much larger) TV for her bedroom from my sisters and brother. (Not pictured: I got her an air fryer and tickets to a show at Sight and Sound.)

I mentioned in September’s post on our unschooling planner system that our “rabbit trails” are the most fun we have in unschooling.

By far the best one this month started when Chris and Ashar were working on their family trivia game – they make up trivia questions for the rest of us on a huge variety of unusual topics. Somehow this morphed into a huge discussion on global prioritization, economics and systems of government. I can’t begin to describe it but it was very cool. 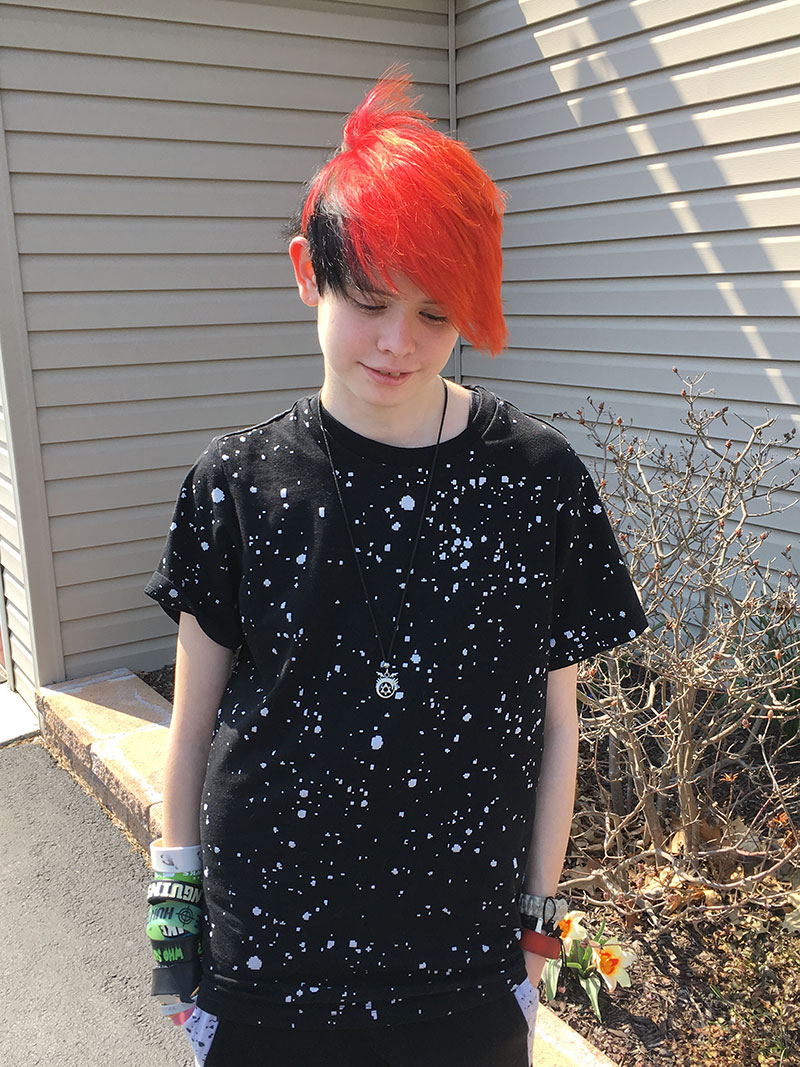 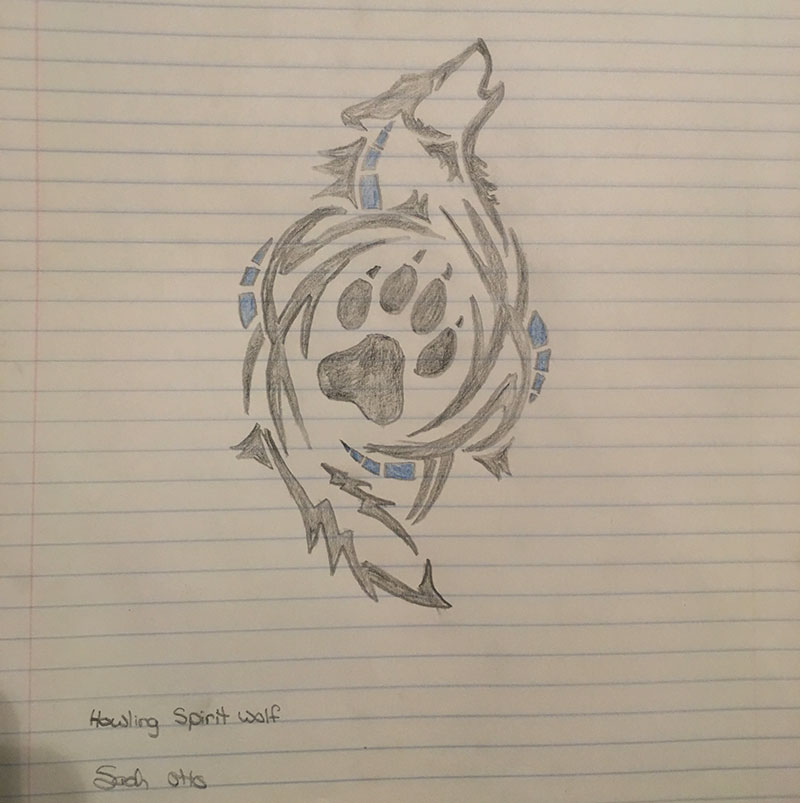 Ashar made this “spirit wolf” image based on tracing a reference image.

Updates from around the family

Since our “curriculum plan” for this year featured not just Ashar but the other house adults, I figure I should give monthly updates on our progress too. So here’s a look at what’s new with the rest of us.

An update from Joan and Kaitlyn

GRAD SCHOOL IS OVER FOR THE SEMESTER. That’s basically the best thing in life for me right now. I ended the semester with two high As and have a whopping week or so until summer classes start, including my capstone project. (Though I don’t graduate until next spring due to some scheduling ick.)

I managed to read 16 books in April, including two by the aforementioned awesome Nadia Bolz-Weber. Other highlights were By far the best was Caroline: Little House Revisited by Ashar Miller, which is a retelling of the Little House books from the perspective of Caroline Ingalls, Laura Ingalls Wilder’s mother. Girls Like Us by Gail Giles was another amazing (and tear-inducing) read.

I also got to do a bunch of scrapbooking and, in big news, Kaitlyn and I found out that we got a pretty huge freelance contract we’d bid on earlier this year with our web development business, Technical Penguins.

Which is good, because…

Kaitlyn and I are officially planning our wedding. March 23, 2019 is the big day, and I already have my dress!

Kaitlyn also reports he’s really liking reading At Home by Bill Bryson, which Chris is also reading. Kaitlyn says it’s a great look at both the depth and breadth of history.

Chris wants to know where the [expletive deleted] April went. I’m pretty much in the same boat. Considering it SNOWED a couple of times in April, I want to know where all of spring went.

Anyway, though, this is Chris’s update. He says:

“The only book I finished in April was Adventure May Be Anywhere by Ruth Manning-Sanders. Beyond that, I accomplished six (maybe seven) sets of taxes, so that was good.”

He’s only a little bit kidding on the taxes thing.

Update on my mom (also Joan)

A few highlights from Mom about some of her favorite activities this month: 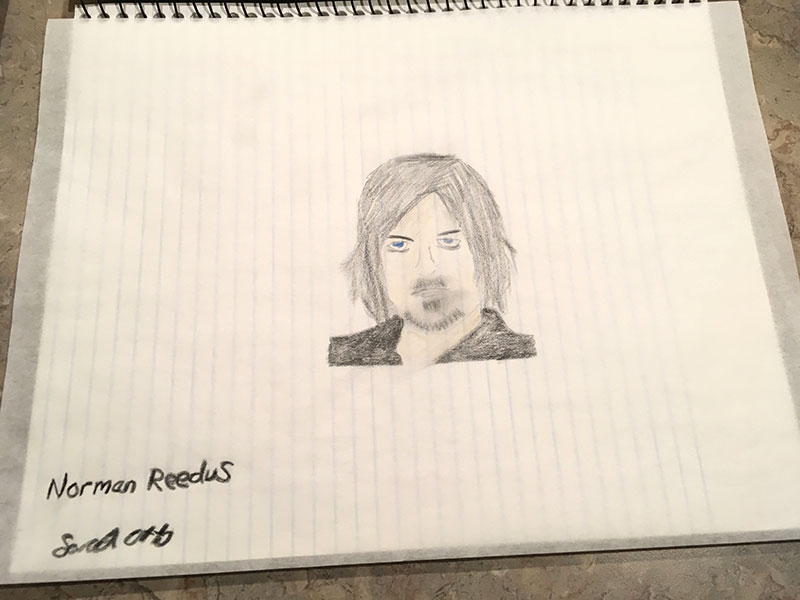 Ashar traced the outline of this image of Norman Reedus and did her own shading and colorizing!

So what’s new with your family this month? How is your 2018 starting out? Drop me a comment! I love hearing from all my “blog friends!”